Federal officials announced new measures to help get fresh, new N95 masks to health care workers and expand their use in other industries after scientists argued that the highly protective masks are essential to keep workers safe from covid-19.

The changes come as U.S. mask-makers say the demand from hospitals is so sluggish that they’ve laid off 2,000 workers and fear some new protective gear companies could collapse. Yet in a letter to lawmakers, hospitals cite ongoing concerns about scarce supplies, saying limits on which workers should get N95s must stay in place.

Among the new moves: The Food and Drug Administration plans to eventually revoke its approval of the widespread crisis-era practice of decontaminating N95 respirators and returning them to front-line workers to use again.

A Centers for Disease Control and Prevention official also announced a tweak to its guidelines, which used to say the protective N95 respirators were reserved for health workers. Now they are “prioritized” for those workers but will be OK for bulk sales to other employers — a step that should boost overall demand.

A group of prominent scientists had written to the White House in February, saying a broader swath of U.S. workers need more protection from the airborne virus. And on March 1, U.S. mask-makers wrote to President Joe Biden decrying a glut of nearly 300 million N95 or equivalent respirators that were made in this country and sitting unused in warehouses.

Lloyd Armbrust, president of the American Mask Manufacturers Association, took a career U-turn to launch Armbrust American and start making masks near Austin, Texas, last year, troubled by “cheap, flimsy” personal protective equipment coming in from overseas: “We … decided to take matters into our own hands.” He said that he was gratified to see federal officials respond to U.S. mask-makers’ concerns and that he expects to see sales rise in coming months.

But he said it’s been a shock for the upstart industry to try and fail over many months to break into the U.S. health care market — dominated by large group purchasing organizations — where the preference to buy from China is ingrained.

“Who knows how many health care workers are getting infected, maybe dying, because of a logistics problem that doesn’t exist,” he said. “That was very frustrating. As a human, that was hard for me to understand.”

Armbrust said about 50 U.S. mask-makers the association represents reported in a survey that they’ve collectively laid off about 2,000 workers in recent months amid sluggish demand. They expect some companies to fail. 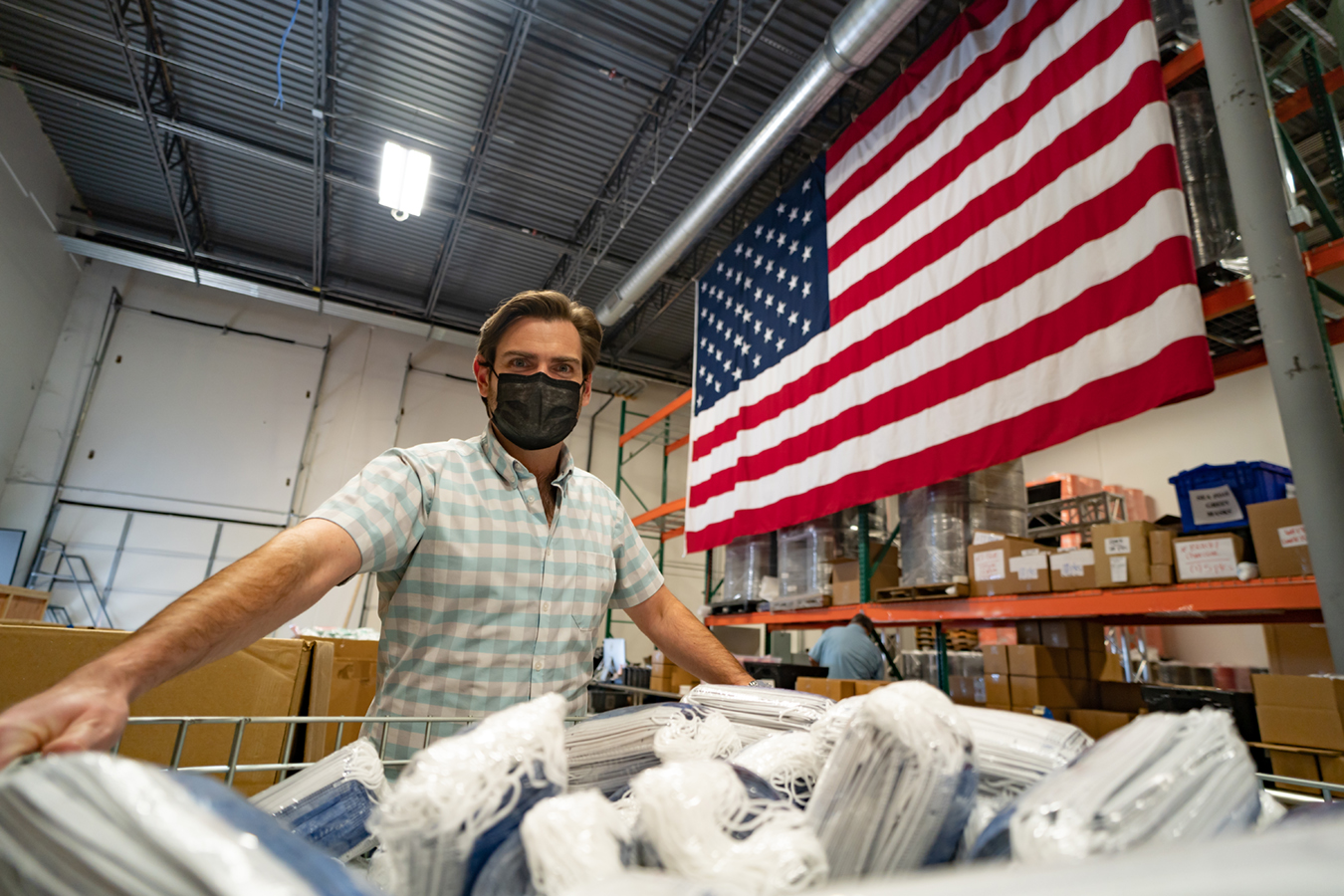 Mike Bowen, vice president of Prestige Ameritech, another Texas-based N95 maker, said he has reduced production because he has 11 million masks on hand. “I am waiting to see if [the] FDA announcement will make hospitals buy more N95s,” he said by email. “If they do, we’ll make what they need. We have a lot of N95 manufacturing capacity.”

Yet even through last month, the American Hospital Association cited supply chain concerns in a letter to lawmakers and endorsed existing CDC guidelines that allow health workers to use a surgical mask unless performing an aerosol-generating procedure. (Although some experts now say a cough produces more aerosols than such procedures.)

Another change by the CDC would allow major retailers like Amazon to sell N95s in bulk to businesses outside the health care sector, said Maryann D’Alessandro, director of the CDC’s National Institute for Occupational Safety and Health lab for personal protective technology.

Researchers and journalists have noted elevated workplace risk to bus drivers, meatpacking employees, and those in manufacturing and food processing who labor in crowded conditions.

D’Alessandro said the agency also approved several models of durable “elastomeric” respirators that are meant to be reused, including one by 3M, and signed a contract to add 375,000 to the Strategic National Stockpile.

That move might serve to protect more health care workers in the case of a variant surge or new pandemic. Health care workers were two to five times more likely than the average person to get covid, studies have shown.

KHN and The Guardian counted more than 3,600 health care workers who died over the past 12 months, many of them people of color and most working outside of hospitals. In interviews with families and colleagues, dozens raised concerns about inadequate protective gear.

Throughout the pandemic, workers who used N95 respirators were routinely asked to put them in a brown paper sack so they could be disinfected by gas, UV light or other means and then returned to them to wear again. Nurses have complained that the respirators, which are designed to be used once, come back misshapen or with a chemical odor.

The FDA on Friday sent a letter to health care providers urging them to “transition away from crisis capacity conservation strategies,” including the disinfection and reuse of disposable N95s.

The letter is one step toward revoking the “emergency use authorizations” that allowed companies to disinfect and reuse N95s, said Suzanne Schwartz, director of the FDA’s Office of Strategic Partnerships and Technology Innovation.

“That was never intended to be anything other than a crisis measure,” Schwartz said in an interview. “We want to be sure health care facilities are getting themselves in a situation where they have respirators or reusables in stock.”

Surveys by National Nurses United from November and February show that about 80% of nurses reported using reprocessed respirators.

She said about half of more than 9,000 nurses surveyed report working in hospitals where patients are not universally screened for covid, presenting the potential for pre- or asymptomatic patients to infect staffers.

The CDC guidance updated in February advising health workers to use N95s or well-fitted masks to care for covid patients remains nonbinding, she said, allowing employers to outfit nurses and other health workers in surgical masks instead of more protective N95s.

The practice has been controversial even after the initial supply chain collapse. Doctors on Twitter reacted strongly to a recent debate held by the University of Calgary where two academics pointed to evidence that covid is airborne — meriting N95 protection for front-line health workers.

Another doctor argued that the coronavirus is primarily spread by droplets — a position held by many U.S. hospital leaders.

Nurses called early in the pandemic for a high level of protection against an airborne virus, but in many places have had to stage protests to get it or go without.

Tags: design, federal, into, officials, pandemic, year
Share This Post
Have your say!
00
Previous ArticleSharifa Murdock Has A Plan For Next Gen Creative GeniusesNext ArticleUse a VPN to Protect Your Online Data While Vacationing This Summer
You May Also Like

I Found My Secret to Feeling Younger and Stronger. The Pandemic Stole It Away.
December 11, 2020