Two Black teens, Ikeria Washington and Layla Temple, were initially named valedictorian and salutatorian of the 2021 graduating class at West Point High School South. On graduation day, the families of the two brilliant teens discovered that they had to share the spotlight with two white students– Dominic Borgioli and Emma Claire Berry.

Via Facebook, Washington accused the superintendent of acquiescing to the white parent’s whining even though their children didn’t deserve the honor. She also added emphasized that Ikeria and Layla took harder classes than Borgioli and Berry. 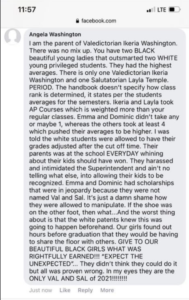 According to WCBI News, the school’s handbook determined the valedictorian and salutatorian by GPA– which Borgioli and Berry did not have.

West Point Consolidated School administrators in West Point, Mississippi, basically invented a new two-point system to determine the additional recipients because Black excellence was too much for the racist school district.

“We apologize for any confusion and problems this has caused. The school district takes full responsibility for this misunderstanding,” the district said via statement.

Their FB page is now gone and they’re getting dragged. The school claims they use two metrics to decide the valedictorian and salutatorian— GPA and QPA. The black students were chosen based on QPA and the two additional white students — GPA. But why wasn’t that announced before? pic.twitter.com/YivRHrMi3m

On Twitter, users sounded off about the district’s double standard.

A Mississippi HS had two black female students as their valedictorian and salutatorian.

Then suddenly, hours before the graduation, they announced two additional students were ALSO the valedictorian and salutatorian for a total of four. The school has deleted their social media pic.twitter.com/CkAKQ5nKjL

Every.single.time! Black people succeed at their game & they change the rules. pic.twitter.com/HiZ0HEjrLt

Another example of moving the goal posts when Black people outperform them.

To add insult to injury they gave the black students second billing… pic.twitter.com/AuDFdvoB8k

I bet Karen and Becky were pissed their little darlings weren’t top of the class and had a their friends calling the school and demanding their kids be recognized. This is bullshit

They actually did work with more difficulty than the two white kids. They robbed those two black students of the spotlight they earned.

Although West Point Consolidated Schools tried to make an illogical situation logical, the community, social media users and Washington and Temple’s parents know that the district can’t put sh*t in a box and call it chocolate.

Tags: angela, blasted, consolidated, point, washington, west
Share This Post
Have your say!
00
Previous Articlehow to manifest CONFIDENCE with the law of attractionNext ArticleRemaining Tulsa Race Massacre Survivors Will Receive $100,000 Foundation Gift
You May Also Like