CASTINE, Maine — For years, Louise Shackett has had trouble walking or standing for long periods, making it difficult for her to clean her house in southeastern Maine or do laundry. Shackett, 80, no longer drives, which makes it hard to get to the grocery store or doctor.

Her low income, though, qualifies her for a state program that pays for a personal aide 10 hours a week to help with chores and errands.

“It helps to keep me independent,” she said.

But the visits have been inconsistent because of the high turnover and shortage of aides, sometimes leaving her without assistance for months at a time, although a cousin does help look after her. “I should be getting the help that I need and am eligible for,” said Shackett, who has not had an aide since late March.

The Maine home-based care program, which helps Shackett and more than 800 others in the state, has a waitlist 925 people long; those applicants sometimes lack help for months or years, according to officials in Maine, which has the country’s oldest population. This leaves many people at an increased risk of falls or not getting medical care and other dangers.

The problem is simple: Here and in much of the rest of the country there are too few workers. Yet, the solution is anything but easy.

Katie Smith Sloan , CEO of Leading Age, which represents nonprofit aging services providers, says the workforce shortage is a nationwide dilemma. “Millions of older adults are unable to access the affordable care and services that they so desperately need,” she said at a recent press event. State and federal reimbursement rates to elder care agencies are inadequate to cover the cost of quality care and services or to pay a living wage to caregivers, she added.

President Joe Biden allotted $400 billion in his infrastructure plan to expand home and community-based long-term care services to help people remain in their homes and out of nursing homes. Republicans pushed back, noting that elder care didn’t fit the traditional definition of infrastructure, which generally refers to physical projects such as bridges, roads and such, and the bipartisan deal reached last week among centrist senators dealt only with those traditional projects. But Democrats say they will insist on funding some of Biden’s “human infrastructure” programs in another bill.

As lawmakers tussle over the proposal, many elder care advocates worry that this $400 billion will be greatly reduced or eliminated.

But the need is undeniable, underlined by the math, especially in places like Maine, where 21% of residents are 65 and older.

Betsy Sawyer-Manter, CEO of SeniorsPlus in Maine, one of two companies that operate that assistance program, said, “We are looking all the time for workers because we have over 10,000 hours a week of personal care we can’t find workers to cover.”

For at least 20 years, national experts have warned about the dire consequences of a shortage of nursing assistants and home aides as tens of millions of baby boomers hit their senior years. “Low wages and benefits, hard working conditions, heavy workloads, and a job that has been stigmatized by society make worker recruitment and retention difficult,” concluded a 2001 report from the Urban Institute and Robert Wood Johnson Foundation.

Robyn Stone , a co-author of that report and senior vice president of Leading Age, says many of the worker shortage problems identified in 2001 have only worsened. The risks and obstacles that seniors faced during the pandemic highlighted some of these problems. “Covid uncovered the challenges of older adults and how vulnerable they were in this pandemic and the importance of front-line care professionals who are being paid low wages,” she says.

Michael Stair, CEO of Care & Comfort, a Waterville, Maine-based agency, said the worker shortage is the worst he’s seen in 20 years in the business.

“The bottom line is it all comes down to dollars — dollars for the home care benefit, dollars to pay people competitively,” he said. Agencies like his are in a tough position competing for workers who can take other jobs that don’t require a background check, special training or driving to people’s homes in bad weather.

“Workers in Maine can get paid more to do other jobs that are less challenging and more appealing,” he added.

His company, which provides services to 1,500 clients — most of whom are enrolled in Medicaid, the federal-state health program for people with low incomes — has about 300 staffers but could use 100 more. He said it’s most difficult to find workers in urban areas such as Portland and Bangor, where there are more employment opportunities. Most of his jobs pay between $13 and $15 an hour, about what McDonald’s restaurants in Maine advertise for entry-level workers.

Stair said half his workers quit within the first year, a little better than the industry’s average 60% turnover rate. To help retain employees, he allows them to set their own schedules, offers paid training and provides vacation pay.

“I worry there are folks going without care and folks whose conditions are declining because they are not getting the care they need,” Stair said.

Medicaid requires states to cover nursing home care for those who qualify, but it has limited entitlement for home-based services, and eligibility and benefits vary by state. Still, in the past decade, states including Maine have increased funding to groups providing Medicaid home and community services — anything from medical assistance to housekeeping help — because people prefer those services and they cost much less than a nursing home.

The states also are funding home care programs like Maine’s for those same services for people who don’t qualify for Medicaid in hopes of preventing seniors from needing Medicaid coverage later.

Bills in the Maine legislature would increase reimbursement rates for thousands of home care workers to ensure they are being paid more than the state’s minimum wage.

The state does not set worker pay, only reimbursement rates.

It’s not just low pay and lack of benefits that hobbles the hiring of workers, according to experts who study the issue. In addition, home care providers struggle to recruit and retain workers who don’t want the stress of caring for people with physical disabilities and, often, mental health issues, such as dementia and depression, said Sawyer-Manter of SeniorsPlus. 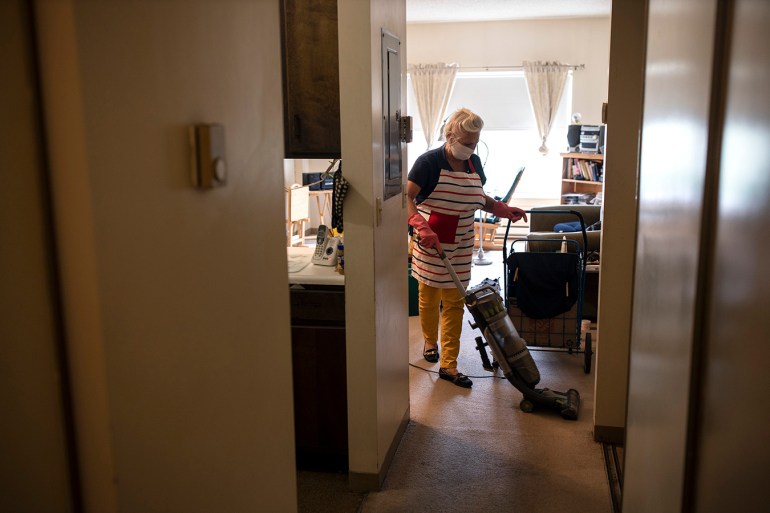 “It’s backbreaking work,” said Kathleen McAuliffe, a home care worker in Biddeford, Maine, who formerly worked as a Navy medic and served in the Peace Corps. She provides homemaker services for a state-funded program run by Catholic Charities. She usually visits two clients a day to help them with chores like cleaning and scrubbing floors, wiping down bathrooms, vacuuming, preparing meals, food shopping, organizing medicines and getting them to the doctor.

Her clients range in age from 45 to 85. “When I walk in, the laundry is piled up, the dishes are piled up, and everything needs to be put in order. It’s hard work and very taxing,” said McAuliffe, 68.

She makes about $14 an hour. Though the job of taking care of the frail elderly requires broad skills — and training in things like safe bathing — it is generally classified as “unskilled” labor. Working part time, she gets no vacation benefits. “Calling us homemakers sounds like we are coming in to bake brownies,” she said.

The homemaker program serves 2,100 Maine residents and has more than 1,100 on a waitlist, according to Catholic Charities Maine. “We can’t find the labor,” said Donald Harden, a spokesperson for the organization. 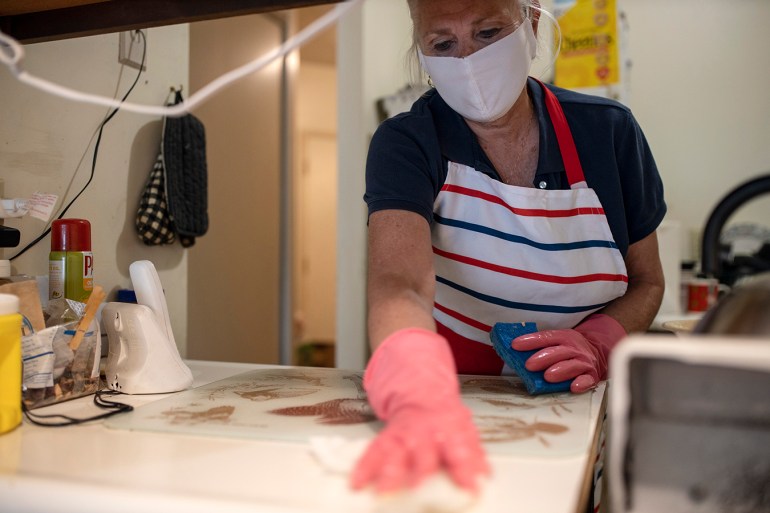 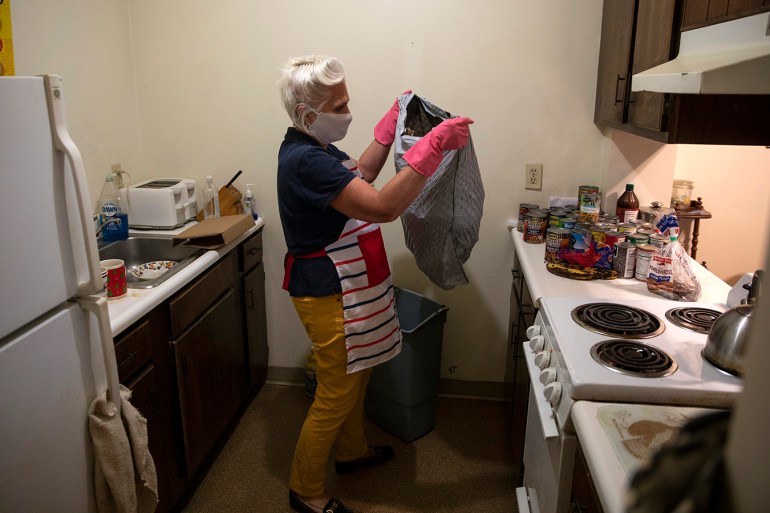 The American Rescue Plan, approved by Congress in March, provides a 10 percentage point increase in federal Medicaid funding to states, or nearly $13 billion, for home and community-based services.

The money, which must be spent by March 2024, can be used to provide personal protective equipment to home care workers, train workers or help states reduce waiting lists for people to receive services.

For Maine, the bump in funding from the American Rescue Plan will provide a $75 million increase in funding. But Paul Saucier, aging and disability director at the Maine Department of Health and Human Services, said the money will not make the waitlists disappear, because it will not solve the problem of too few workers.

Joanne Spetz, director of the Health Workforce Research Center on Long-Term Care at the University of California-San Francisco, said throwing more money into home care will work only if the money is targeted for recruiting, training and retaining workers, as well as providing benefits and opportunities for career growth. She doubts significant improvements will occur “if we just put money out there to hire more workers.”

“The problem is the people who are in these jobs always get the same amount of pay and the same low level of respect no matter how many years they are in the job,” Spetz said.

Tags: care, desperate, home, often, seniors, wait!
Share This Post
Have your say!
00
Previous ArticleJazmine Sullivan Wants To Work With Megan Thee StallionNext ArticleInvest In Your Business With This $35 SEO Marketing Bundle
You May Also Like
Famous Dex Had SWAT Called To His Home
January 31, 2021

‘An Arm And a Leg’: How a Former Health Care Executive Became a Health Care Whistleblower
January 11, 2021

What Seniors Can Expect When COVID Vaccines Begin to Roll Out
December 9, 2020