One evening in late March, a mom called 911. Her daughter, she said, was threatening to kill herself. EMTs arrived at the home north of Boston, helped calm the 13-year-old, and took her to an emergency room.

Melinda, like a growing number of children during the covid-19 pandemic, had become increasingly anxious and depressed as she spent more time away from in-person contact at school, church and her singing lessons.

KHN and NPR have agreed to use only the first names of this teenager and her mother, Pam, to avoid having this story trail the family online. Right now in Massachusetts and in many parts of the U.S. and the world, demand for mental health care overwhelms supply, creating bottlenecks like Melinda’s 17-day saga.

Emergency rooms are not typically places you check in for the night. If you break an arm, it gets set, and you leave. If you have a heart attack, you won’t wait long for a hospital bed. But sometimes if your brain is not well, and you end up in an ER, there’s a good chance you will get stuck there. Parents and advocates for kids’ mental health say that the ER can’t provide appropriate care and that the warehousing of kids in crisis can become an emergency itself.

What’s known as emergency room boarding of psychiatric patients has risen between 200% and 400% monthly in Massachusetts during the pandemic. The CDC says emergency room visits after suicide attempts among teen girls were up 51% earlier this year as compared with 2019. There are no current nationwide mental health boarding numbers.

“This is really unlike anything we’ve ever seen before, and it doesn’t show any signs of abating,” said Lisa Lambert, executive director of Parent/Professional Advocacy League, which pushes for more mental health care for children.

Melinda spent her first 10 days in a hospital lecture hall with a dozen other children, on gurneys, separated by curtains because the emergency room had run out of space. At one point, Melinda, who was overwhelmed, tried to escape, was restrained, injected with drugs to calm her and moved to a small, windowless room.

I met Melinda in early April, on her 12th day in the ER. Doctors were keeping her there because they were concerned she would harm herself if she left. Many parents report spending weeks with their children in hospital hallways or overflow rooms, in various states of distress, because hospital psychiatric units are full. While demand is up, supply is down. Covid precautions turned double rooms into singles or psych units into covid units. While those precautions are beginning to ease, demand for beds is not.

Inside her small room, Melinda was disturbed by cameras that tracked her movement, and security guards in the hallways who were there, in part, for her safety.

“Desperate” is a word both Melinda and Pam use often to describe the prolonged wait for care in a place that feels alien.

But this experience is not new. This was Melinda’s fourth trip to a hospital emergency room since late November. Pam said Melinda spiraled downward after a falling out with a close family member last summer. She has therapists, but some of them changed during the pandemic, the visits were virtual, and she hasn’t made good connections between crises.

“Each time, it’s the same routine,” Pam said. Melinda is rushed to an ER, where she waits. She’s admitted to a psych hospital for a week to 10 days and goes home. “It’s not enough time.”

Pam said each facility has suggested a different diagnosis and adjusted Melinda’s medication.

“We’ve never really gotten a good, true diagnosis as to what’s going on with her,” Pam said. “She’s out of control; she feels out of control in her own skin.”

Melinda waited six months for a neuropsychiatric exam to help clarify what she needs. She finally had the exam in May, after being discharged from the psychiatric hospital, but still doesn’t have the results. Some psychiatrists say observing a patient’s behavior is often a better way to reach a diagnosis.

Lambert, the mental health advocate, said there are delays for every type of psychiatric care — both residential and outpatient.

As her stay dragged on, Melinda bounced from manic highs to deep emotional lows. The emergency room is a holding area; it isn’t set up to offer treatment or psychiatric therapy.

On this day Melinda was agitated.

“I just really want to get out of here,” she said in an audio diary she was keeping at the time for this story. “I feel kind of helpless. I miss my pets and my bed and real food.” She’d had a panic attack the night before and had to be sedated. Her mom, Pam, wasn’t there.

“The longer she’s here, the more she’s going to decline,” Pam recorded in her own audio diary. “She has self-harmed three times since she’s been here.”

The hospital and its parent network, Beth Israel Lahey Health, declined requests to speak about Melinda’s care. But Dr. Nalan Ward, the network’s chief medical officer for behavioral health services, hosts a daily call to discuss the best place for inpatient psychiatric treatment for each patient. Some may have unique medical or insurance constraints, she said. Many insurers require prior approval before they’ll agree to pay for a placement, and that, too, can add delays.

For Melinda, the issue keeping her from moving out of the ER and into an effective treatment program could have been her behavior. Pam was told her daughter may be harder to place than children who don’t act out. Hospitals equipped to provide inpatient mental health care say they look for patients who will be a good fit for their programs and participants. Melinda’s chart included the attempted escape as well as some fights while she was housed in the lecture hall.

Secluding Melinda in the ER didn’t help, Pam said. “She’s, at times, unrecognizable to me. She just is so sure that she’s never going to get better.”

Melinda described feeling increasingly isolated. She lost touch with friends and most family members. She’d stopped doing schoolwork weeks earlier. The noise and commotion of a 24/7 ER was getting to Melinda.

“I’m not sleeping well,” she noted in her diary. “It’s tough here. I keep waking up in the middle of the night.” 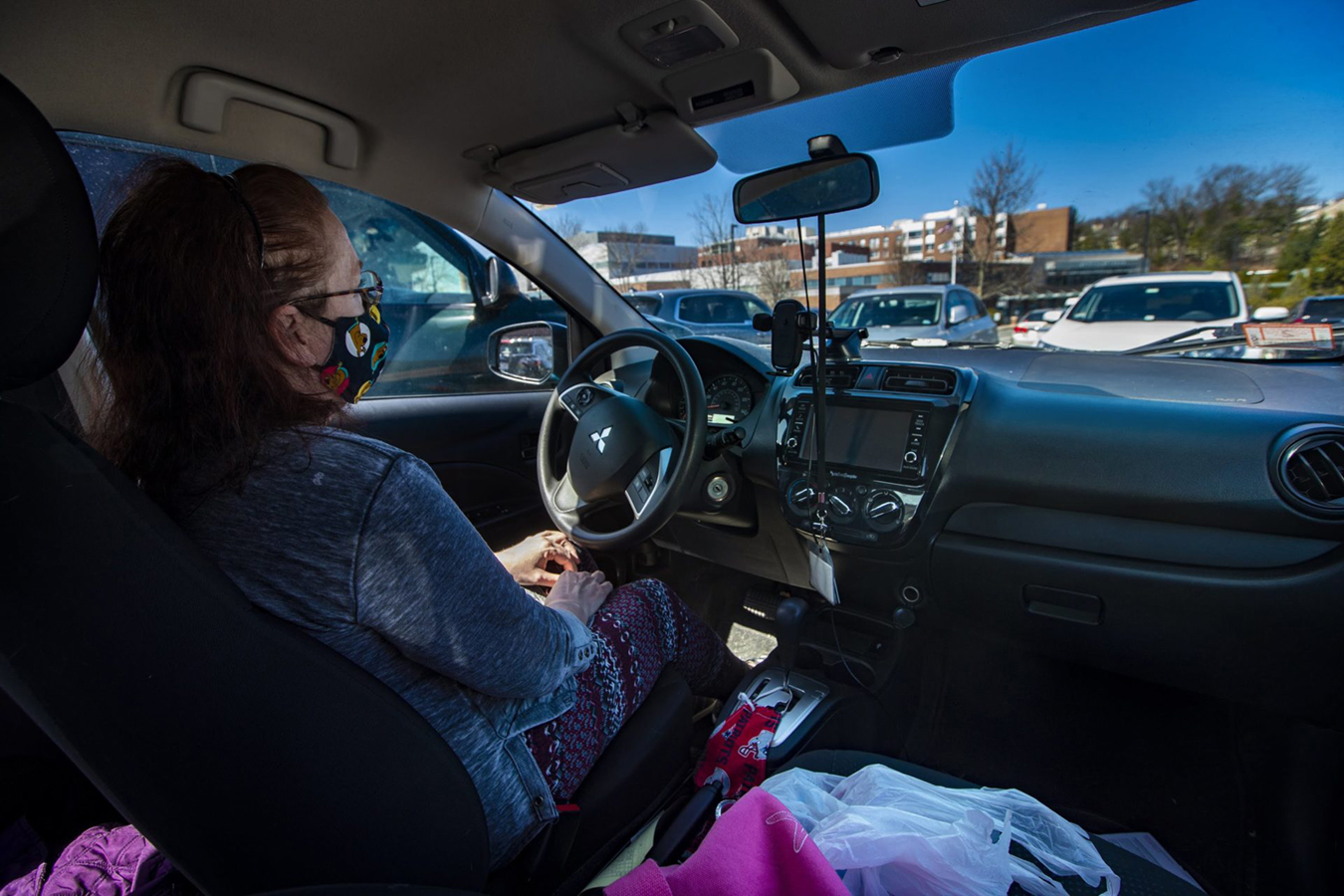 Day 15: Mom Retreats to Her Car to Cry

Boarding is difficult for parents as well. Pam works two jobs, but she visited Melinda every day, bringing a change of clothes, a new book or something special to eat.

“Some days I sit and cry before I get out of the car, just to get it out of my system, so I don’t cry in front of her,” Pam said in her diary entry that day.

Some hospitals say they can’t afford to care for patients with acute mental health problems because insurance reimbursements don’t cover costs. Massachusetts is spending $40 million this year on financial incentives to create more inpatient psychiatric care. But emergency rooms are still flooded with psychiatric patients who are in limbo, boarding there.

Day 16: ‘I Wish Someone Would Just Understand Me’

“I never thought we’d be here this long,” said Pam.

At the nurses’ station, Pam was told it could be two more weeks before there would be an opening at an appropriate hospital.

In Massachusetts, Gov. Charlie Baker’s administration says it has a plan that will keep children out of ERs and reduce the need for inpatient care by providing more preventive and community-based services. Parents and providers say they are hopeful but question whether there are enough counselors and psychiatrists to staff proposed community clinics, therapy programs and more psychiatric hospital beds.

Meanwhile, in the ER, Melinda was growing listless.

“Life is really hard because things that should be easy for everyone are just hard for me,” she said. “When I ask for help, sometimes I picture going to the hospital. Other times I wish someone would just understand me.”

Then, in the late evening on Day 16, the family got word that Melinda’s wait would soon end.

On Day 17, Melinda was taken by ambulance to a Boston-area hospital that had added child psychiatric beds during the pandemic. She was lucky to get a spot. The day she arrived, there were 50 to 60 children on the waiting list.

“That’s dramatically higher” than before the pandemic, said Dr. Linsey Koruthu, one of Melinda’s doctors and a pediatric psychiatrist at Cambridge Health Alliance. “About double what we would have seen in 2019.”

Doctors there adjusted Melinda’s medications. She met with a psychiatrist and social worker daily and had group therapy and time for schoolwork, yoga and pet therapy. Hospital staff members met with Melinda and her family. She stayed two weeks, a bit longer than the average stay.

Doctors recommended that Melinda move from inpatient care to a community-based residential treatment program — a bridge between being in the hospital and returning home. But those programs were full and had weeks-long delays. So, Melinda went straight home.

She now has three therapists helping her make the transition and use what she’s learned. And as covid restrictions have begun to ease, some sessions are in person — which Koruthu said should be more effective for Melinda.

Pam said the transition has been rough. Police came to the house once and suggested Melinda go to an ER, but she was able to calm down before it came to that. Melinda has developed an eating disorder.

The first available appointment with a specialist is in August. But, by mid-June, Melinda was able to graduate from middle school, after finishing a backlog of schoolwork.

“If you had asked me two months ago, I would have said I don’t think she’ll make it,” Pam said. “We’re getting there.”

Tags: beds, health?’:, keeps, mental, shortage, vacancy:
Share This Post
Have your say!
00
Previous ArticleSeason Five Of ‘The Good Fight’ Premieres On Paramount+Next ArticleLearn New Business Skills On The Go With A Year’s Access To Alpe Audio
You May Also Like